Yes Texas is big.  And Texans will often and proudly remind you of it.  We all know it is the largest state in the lower 48 and that it should not be messed with, etc. (as the well worn saying goes).  But, at almost $1.9 trillion, the Texas economy is larger than Russia’s and is a top-10 economy just ahead of South Korea and Canada, right behind Brazil.  Everything does truly seem bigger in Texas.  But there is another state that is similar in many ways, but also radically different in so many others.  California is a serious powerhouse with a GDP of $3.2 trillion, ranking it as the fifth largest in the world, just behind mighty Germany.  Fifty-three Fortune 500 companies are headquartered in Californa, but Texas stands strong, clocking in at 50.  Impressive on both counts but California is, well – bigger.

This is where things get really interesting, however, as Texas is experiencing a net gain in just about every measurable statistic on its way to possibly becoming the biggest, while California appears to be struggling to hold its ground.  Why?  According to an annual Chief Executive Magazine survey, CEO’s across the county consistently declare California the worst state in which to do business.  High utility costs, high taxes (income tax alone is a staggering 9.3% for most, topping out at a whopping 13.3% at the high end), ballooning labor expenses, nettelsome regulations, unaffordable housing and a perceived general hostility toward business are a constant anchor for Cali, weighing it down.  Conversely, a recent CNBC study concludes that the Lone Star state is in fact the shining economic star of the United States and is now officially “America’s Top State for Business” -- for exactly the opposite reasons.

Naturally, major brand name corporations like Oracle, Uber, Schwabb, McKesson, Tesla, Hewlett Packard, Toyota and many others are moving or have moved their base of operations to Texas.  Many others still have dramatically augmented their Texas presense with Facebook, Google, Amazon and Apple adding literally many thousands of new jobs catalyzing the construction of glassy towers and shinging campuses in Austin alone.  Their stated reasons for moving are consistent.  On average it is considerably less expensive for CEOs to run their businesses in Texas and the lifestyle that Texas affords those corporate employees is, well -- much more affordable.  One of the greatest incentives is the fact that Texas does not levy state income tax on its citizens ( yes, that’s 0.00%).  And Austin specifically, now known as Silicon Hills, is very attractive to Silicon Valley-based technology companies given that a tech-based ecosystem is now a big component of its economy.  There is now a relatively deep tech talent pipeline in Austin and the easy-breezy culture in ATX generally allows these companies to succeed without the imposition of fiscal, regulatory or social headwinds.

But is all as it seems?  We’ve certainly seen what appears to be an exodus of sorts to Texas from California.  There has been massive housing demand, infrastructure pressure and myriad new projects of previously unheard of scale in what is still a mid-sized city.  In fact, it is a driver in PMA’s decision to open an Austin, Texas office and PMA has certainly managed its fair share of such projects here.  These are indeed exciting times but some perspective is in order.  As fantastic as Texas may be on paper for the corporate Sequoias of California’s economy, there is almost always a counter consideration.

It is important to note that PMA also has three offices in the State of California so perspective is something that I think we are in an excellent position to serve up.  Although there has been a steady flow of business leaving California for some time now, its economy continues to grow, as indicated above.  Why?  Altough mature companies move to Texas to save money, they tend to start in California because of money.  Venture capitial money in fact.  According to PitchBook, the Bay Area alone accounts for the largest amount of venture investment in the United States by a wide margin at about one in every five deals.  Put another way, 38% of all venture capital dollars invested in 2019 went to start up enterprises in Silicon Valley alone.  In 2020, despite the pandemic, that number has only increased slightly to 40%.  Bottom line?  Silicon Valley still has no real rival in this regard which sets it up for an epic wave that it will continue to ride for some time to come.

This establishes an interesting interplay between money motivating start-up enterprise and money motivating individuals, who value lower taxes, and lower housing costs.  This dynamic in turn ties to the larger companies that employ them, which often pay attention to what their employees want and which also want to operate in a less burdensome regulatory and tax environment themselves.  Simply put, it is much easier for some of the truly large California companies to “uproot” because they can.  Many are merely maneuvering by changing their locus to a place where they already have a substantial presence – like Texas.  Large companies have much to save by moving while the smaller, innovation-driven enterprises seemingly have much to loose by venturing away from Silicon Valley-focused equity sources.

Additionally, the Covid-induced shift to working from home, which has an unknowable future, has made it much easier for many larger companies to simply waive their wands to declare that Austin, Dallas or Houston is now their new “HQ.”  It is incontrovertable that the pandemic-induced rise of the remote working phenominon has been a catalyst for companies to reevaluate their geographic options and associated lifestyles.  Here’s a particularly on-point quote by a California corporate executive that seems to sum up a potential answer to whether Texas is actually experiencing a Calexit.  “The California companies are not moving operations to Texas, but instead are mainly moving their headquarters. This seems to be mainly for taxes, or maybe for cheaper talent. But Silicon Valley has a reputation for talent, and that reputation seems to be just fine based on the dollars still flowing in to ventures there.”  Well there it is. 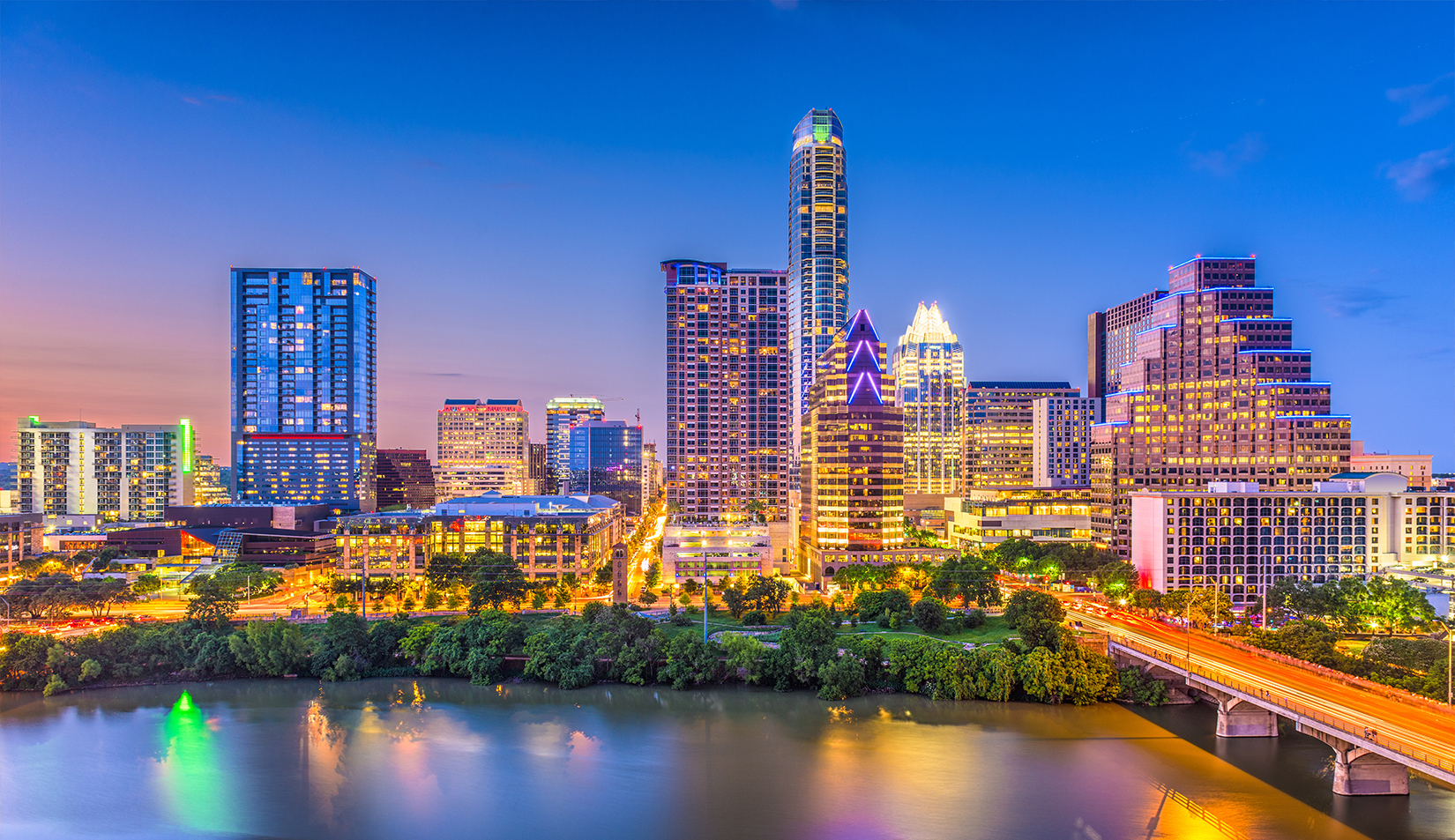 No Texodus?  And what does this mean for Austin?  Well, for now, it means that Austin is still growing quickly and experiencing a coming of age of sorts as it metamorphasizes into what will invariably become a world class city.  The Austin area appears to be poised to continue to experience a net migration gain of about 130 people per day, leading the nation in the large city category.  That’s great for the construction industry here, which will invariably thrive in coming years as much needed single and multi-family housing is added, new office and residential towers are constructed at a rapid clip, infrastructure is added and yes, even more new retail is built out.  It’s all coming together in Austin and with its involvement in so many exciting new projects, it is truly rewarding to be a part of the changing landscape.  But there is another important indicator that all of this rapid growth here in Austin may not be what you think it is.  According to Austin Migration Insights, the majority of new migrants to Austin (about 53%) hail from Texas.  Yes Texas.  California sits in distant second at 7%.  Despite the now ubiquitous “Don’t California My Texas” bumper stickers and t-shirts found all over the state, over 55% of the people who migrate to Texas annually are in fact from another country, with most coming from China and India.  While the largest domestic flow does come from California, New York, Illinois and Louisiana are also sizeable contributors.

Although Austin, and Texas as a whole, are uniquely positioned to benefit from some of the hemorrhaging that California is suffering, the wound does not necessarily appear to be mortal and it certainly is not one inflicted by Texas (despite what a former Texas Governor might believe about the influence of his business solicitation trips there).  While California’s cuts and bruises are ultimately self-inflicted the net positive associated with the billions of investment dollars still flowing into the state will likely be the elixir needed to ensure that the Cali economy continues to be healthy enough to remain the king of the hill – for now.  So the much discussed Calexit or Texodus is probably somewhat overblown, but Texas and Austin more specifically, are just about perfectly positioned to capitalize.  Over the last several years, PMA has completed well in excess of 2 million square feet of space in the office, life sciences and bio-technology sectors on behalf of California-based companies looking to bolster their presence in the Austin metro area.  We expect that Austin and Central Texas will continue to see strong economic growth and net positive migration for many years to come as a result, and with its expertise, local knowledge and deep experience, PMA will be ready do its part, Texodus or not.